Adjusting speed as a means of controlling a process

The following are process control benefits that might be provided by an adjustable speed drive: 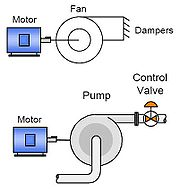 An adjustable speed drive can often provide smoother operation compared to an alternative fixed speed mode of operation. For example, in a sewage lift station sewage usually flows through sewer pipes under the force of gravity to a wet well location. From there it is pumped up to a treatment process. When fixed speed pumps are used, the pumps are set to start when the level of the liquid in the wet well reaches some high point and stop when the level has been reduced to a low point. Cycling the pumps on and off results in frequent high surges of electrical current to start the motors resulting in electromagnetic and thermal stresses in the motors and power control equipment, the pumps and pipes are subjected to mechanical and hydraulic stresses, and the sewage treatment process is forced to accommodate surges in the flow of sewage through the process. When adjustable speed drives are used, the pumps operate continuously at a speed that increases as the wet well level increases. This matches the outflow to the average inflow and provides a much smoother operation of the process.

An adjustable speed drive often uses less energy than an alternative fixed speed mode of operation. Fans and pumps are the most common energy saving applications. When a fan is driven by a fixed speed motor, the airflow may sometimes be higher than it needs to be. Airflow can be regulated by using a damper to restrict the flow, but it is more efficient to regulate the airflow by regulating the speed of the motor. It follows from the affinity laws that reducing fan speed to 50% results in a power consumption drop to 12.5%.